Fathers Day - Book review 'where are you really from?' 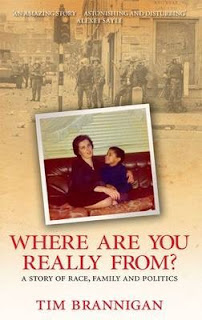 Just finished reading an amazing book by Tim Brannigan ‘where are you really from?'. The book is about his life growing up in Belfast during the ‘troubles’ fighting between republicans (IRA) and loyalists.
In his book, Tim Brannigan tells of his difficulties growing up,trying to fit in and always being aware he was different to everyone else. Growing up he was influenced by the IRA Sinn Fein and actually went to prison for a few years for allowing IRA activists to hide weapons in his mother’s car.

What makes this story all the more amazing and the reason why it is called ‘where are you really from’? is because Tim Brannigan is black! which in Belfast 40yrs ago was unheard of!

His mother whilst married met a Ghanaian doctor and had an affair with him in Belfast in the 60’s and as a result fell pregnant and the book speaks about the cover up and how his mum cleverly adopted her own son.

However the last few chapters speak about Tim Brannigan, who now in his 40’s seeks to find out who his dad is. This is fraught with complication’s and he ask’s himself why is he looking for his father? ‘I was shocked that a situation I thought I had under control could get me so angry. Who needs a father anyway? I was a 40 year old man now – what was in it for me? What does it mean to have a Father? A role model? I had my mum for that.

He does some research, finds out he has 5 Ghanaian half brothers and sisters. He makes contact with them and even travels to Ghana to meet his biological father, Dr Micheal Ekue.

What this book (for me) shows is the influence fathers can have wether they are present or absent. Wether we realise it or not fathers provide an immense sense of identity for their children.

As we celebrate Fathers day we are acutely aware that just as Tim Brannigan was looking for his Father, Society is also looking for Fathers, Men, Good men of character, integrity and morality to have impact in their Families lives.
Posted by Clement Okusi at 23:26 No comments: