BBC Worst place in the world for being GAY (Homosexual)

Someone sent me the link and asked me to watch the above programme that was aired recently.

Firstly as a Christian and a Pastor, it was sad to see people being victimised and brutalised because of their sexuality, whether we agree theologically, socially or ethically with it or not! The way of Christ is to ‘love our neighbours’ for me the story of Stosh (sic) was very harrowing and will live long in the memory.

What was the purpose of going to Uganda? Well, Uganda was recently in the media following reports of anti homosexuality legislation and the recent death of a Ugandan Homosexual (though some reports say the attack had more to do with robbery than homophobia) seems to have promoted Uganda to the premier league of anti homosexuality. So with that in mind, Radio DJ Scott Mills, a Gay man travels to Uganda to see what life would be like as a Homosexual.

I actually found this programme to be quite racist and condescending. I suspect Scott Mills is not a serious Journalist, but he came across as quite ignorant and arrogant. You are surprised that huge sections of the world don’t agree with a lifestyle that (as you admit) was illegal in this country thirty to forty years ago. So the insinuation is we i.e. the UK have change our position on this issue, why haven’t you? The problem with a lot of Europeans is that they consider their worldview to be the most superior consciously or not. There is a sort of intellectual, social and elitist snobbery that exists. Do you notice that if you have views contrary to the pro homosexual movement how they use shame? How you are viewed as some backward stone age Neanderthal? Whilst I am happy that the Radio 1 DJ had an easy time coming out as a Homosexual in the UK (Portsmouth) that does not mean that everyone in the UK is supportive of the Homosexual lifestyle!

As he visits a slum with open sewers making comments such as ‘If you want to see what homophobia does’? What a class one, or should that be radio one idiot! He obviously has not spent much time in Asia, Africa and many other parts of the world? I suspect on his salary he does not do much visiting of third world countries? So being anti homosexual forces people into poverty in Africa eh? Scott Mills seems shocked that people have ‘Bars on the windows’ in Africa, has this guy never been to many of housing estates in Hackney, Peckham, Harlseden, Kilburn and many other places in London? Contrasting the quay in White middle (or is that upper?) class Portsmouth with the bustling market places of Uganda is not really a fair comparison is it?

Did you notice the repeated attacks on ‘Pastors’, and ‘Preachers’? (I actually thought the pastor was not as bad as the DJ tried to make him out to be! In fact the pastor seemed quite tactile with the DJ, hmmm maybe not that homophobic eh?) let me guess Scott Mills, you’re not a devout Christian? Possibly atheist? Agnostic? Give me a break just who the heck does this guy think he is? A white, well paid middle class guy, who has lived an easy life, much of it spent in nightclubs treated like a VIP, travelling to the other side of the world to criticise and critique other peoples culture??!! Does being a Gay (or straight) radio 1 DJ qualify you to do that? I must say the Homosexual movement is clever and pervasive in the media, did you notice the dramatic changes in background music (watch it again) and crouching down in the back of the minibus to try and convey a dangerous mood?

I must say the visit to the witch doctor was hilarious – I suspect they saw him coming and thought to themselves ‘there’s one born every minute’. Also the look on the politicians face when he found out that Scott Mills was Gay was hilarious.

Having said all of the above, there is a serious issue at hand and that is how those with a Christian worldview engage with a world that is ‘sin sick’. We are called to love those in the world but not be like those in the world. I think that as Christians we should state our theological position in a clear and loving manner. God bless ALL.
Posted by Clement Okusi at 02:50 1 comment: 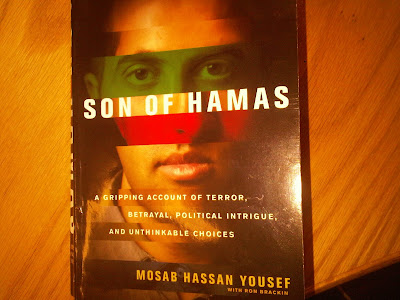 Just finished reading an 'incredible' book called 'Son of Hamas', written as the title suggests by Mosab Hassan Yousef, the eldest son of one of the founders of Hamas. It is a gripping read from someone who was raised in Hamas. The book is also up to date in that many of the events spoken about happened in the last 10-15 years. This book gives you an insiders perspective to all the stories we read and saw in the media at that time. If you want to quickly try and understand some of the struggles of the middle east, this book will help! God bless.
Posted by Clement Okusi at 03:57 No comments: